I've realized, recently, after having spent a lot of time with my species (aka females... I live with eight of them) - that girls do some ridiculous things to themselves, all in the name of looking nice. For the benefit of the rest of you who get to enjoy the fruits of their endeavors, particularly the male population (because let's face it, a lot of the time they're the reason women bother with such things), I'm going to list out some of them so that you take a moment to stop and appreciate. Or just marvel at the madness. Whichever comes first.

Removing 'Unwanted Hair'
YES. Your daily dose of gross-too-much-information provided by the Shifani blog. Boys, I am going to tell you something that may shock you: the women in your life have hair above their lips, sometimes on their chin, on their arms, under their arms, on their legs, and in other places too. Asian women are hairy. Some less than others, but still. Hair occurs. And women take great pains to make sure no one discovers this dirty little secret. Why? Because ONLY MEN ARE SUPPOSED TO HAVE HAIR IN PLACES BESIDES ONE'S HEAD. Women must be hairless! Such is the decree of society. So women all over the world go to parlours, once every month, or week even, and pay some girl money - to paste waxy strips on their arms and legs and rip the hair out of their roots. Yes, rip. And don't even get me started on the Brazilian Wax - damn. Then they use a length of cotton thread to rip the hair out from between their eyebrows, from above their lips and wherever else. It's brutal, militant stuff. If you want to know what it's like, just ask someone to grab the hair on your head and PULL. Parlours everywhere resonate with the cries of women in pain! Martyrs for the name of beauty - who must do what it takes to look pretty in a sleeveless blouse at Aunty Monica's wedding.

The Painting Of Faces
Guys don't understand what goes into make-up. To the uninitiated, make-up is rubbing lipstick on and using a brush on your cheek. Today, that shit is way more complex, bro. I don't wear make-up but I had to review a salon one day (yes, my Editor must have been drunk when he decided to send me of all people), and it was like... a whole new world (cue the song!). Except, like, without the magic carpets. Women paint their faces. I say, paint, because it's a process: the face becomes a canvas and all these brushes and tools are pulled out to make their faces look like something they're normally not. I saw a girl spend twenty minutes on a woman's eyelid. I am not even kidding. She was trying to "give the eyelid the right tinge of golden brown". Then there's Foundation and Lip-shading and all levels of Eye Make-up - and I don't even know what - to make the woman's face look thinner, fairer, curvier, shinier - you name it. It's the art of creating a beautiful illusion, and it's extremely convincing - so if you see a beautiful woman at a party, wash her face, it's like witnessing freaking Cinderella's chariot turn into a pumpkin.

Painful Clothes
Women wear a lot of things that their bodies feel uncomfortable in, because it looks nice. Sometimes it's jeans, sometimes it's a tight dress, sometimes it's a hairdo, sometimes it's a pair of shoes. If it was a world in which looking pretty wasn't such a super duper accomplishment - and women could really have their way - they'd walk around in loose tshirts, unflattering pajama pants, Bata slippers and a ponytail. However, it is not such a world, and women must - simply must! - try to look hot and sexy for parties and weddings and office and college and wherever the boy she's trying to attract happens to be. If you have got it - the body or the face, apparently - then you simply must flaunt it. If it's not being done for the sake of a compliment from the boyfriend, it's being done for compliments nonetheless. The jeans are too tight for easy walking, or the skirt is too short for comfort, or the shoes are on heels too high, but all is endured in the holy name of looking pretty! I had a recent unsavoury experience wearing my roommate's heels ('cause my shoes tore) one fine evening. It was painful, in my toes, my soles and my thighs. And man, I am telling you, it is some kind of mad skill to wear those things on a regular basis. You have to understand (I am speaking to the noobs aka men and wearers of sneakers such as myself), the unnatural position that the body takes when it climbs into high-heeled shoes, because I don't think anyone notices and appreciates this sacrificial act. This calls for a Paint illustration! 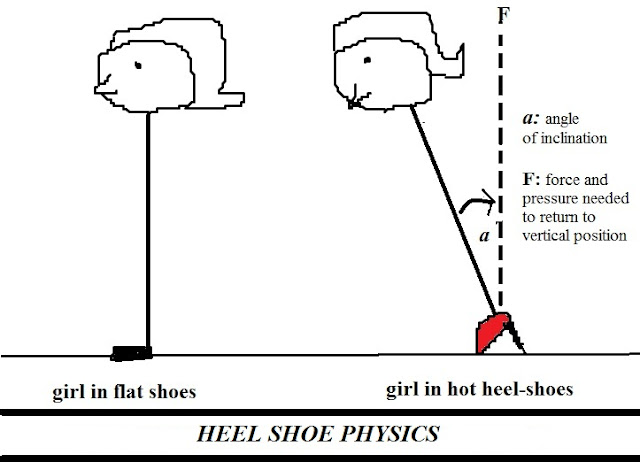 Sigh. The things girls do to look pretty. Is it worth it in the end? The discomfort and the shoe cuts? Maybe it is. Some wise guy once said that the world is just a bunch of people trying to get laid. And looking pretty is just part of all that. It's biology.

Then again, I don't see any boys painting their eyelids and torturing their feet.
Posted by The Shifani at 11:47

The Shifani
Hi. I write.